We met with Catherine to have a chat about her life so far, involvement in TREC and what it means to be a Trustee here at LGBT Foundation. 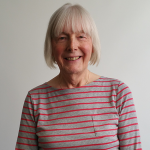 Can you introduce yourself and tell us a bit about you who you are and what you do?

My name is Catherine Poulton and I’m a Trustee of LGBT Foundation. I’m a trans woman. I didn’t start my transition process until I was nearly 60 years of age and it took me nearly 10 years to complete it. Now I’m fully transitioned and I’ve been living as a female for the last 6 years. I think I’ve been able to establish a successful life for myself. I find I can mix freely in society. I have a circle of friends, not exclusively within the trans community. I regard my transition as being successful.

You were involved in TREC. Can you tell us what TREC was and what your role was there?
I was involved in TREC almost from the initial creation, which from memory was round about 2009. I was asked to join it because I had some experience of the trans community and also because I had a project management background. TREC stands to the Trans Resource and Empowerment Centre. It was really designed, as it says, to be a resource centre for the trans community – a source of information, which people could go to and access. We did used to have a regular monthly meeting, which were held here on a Saturday at the LGF as it was known then. We offered a range of facilities or events for the trans community to take part in, for example there were acting classes and still drawing classes. The idea was to enable the trans community, who may be at various stages in their lives and may not all fully transition, to engage in some activities, which would benefit them in terms of personal growth, satisfaction and fulfillment in a space that was safe.

One of the things that we did was to look at the position of GP practices in the area and the sort of experiences that people were having, in order that we provide information and guidance both for members of the trans community and the GPs as to what is both good and bad practice. We also provided training on trans related matters.

TREC continued for about 5 years. The reason it eventually wound up wasn’t because it failed, it was successful right to the very end. Some of the key players in it, and by that I mean the people that were for example doing the research work and the people organising the events, moved on in their respective careers and they weren’t able to devote their time to it. We felt that perhaps TREC had come to natural conclusion in what it had achieved.

How did you find out about LGBT Foundation?
I first became aware of the LGF in 2003 or 2004, which was at the very start of my transition experience. Before I had made the transition, I’d sought medical advice and support and I was under the care of the Charing Cross Gender Clinic. It was a very difficult time; I needed some help and support and the LGF(as it was called then) gave me that. I was very grateful. I’m loath to say it was a ‘lifesaver’ but it certainly helped me negotiate a difficult period in my life because there was somebody there I could go and talk to on a regular basis about the things that I was experiencing. That was wonderful.

Whereas most people was thought the Lesbian & Gay Foundation, as it was known then, had no connection with the trans community at all. That wasn’t the case. They clearly did, as I found out.

You got involved with the LGBT Foundation as a Trustee. Can you tell us what that role involves?
I’ve worked as a Trustee in other organisations and I found it a very satisfying role. Trustees are really the people who oversee the organisation and help direct its progress and development. The idea is that the professional management team go to its board of trustees, who have a degree of independence and can help the professional management team formulate its plans. It provides a degree of independent scrutiny and guidance but, essentially, its role is to help and support the management team.

What are your hopes for the new Trans programme and how do you see it fitting in to the climate of trans activism and trans work that has been going on in Manchester over the last decade?
Well, most importantly, I want the Trans Programme to be successful. We’re still in the process of fully defining what it is that we want to achieve and in order to do that we’re engaging with our Trans Advisory Group. In a more general sense we want to raise the profile and the status of the trans community. We’re looking at the issues affecting the trans community - whether they be social, medical, legal or employment. We’re also, as an organisation, looking both locally and nationally, at what we can do to help to enhance the standing of the trans community and help it address any problems or issues that are causing it any particular difficulty. I think it’s very important that we do this.

What does trans awareness mean to you?
At its most basic level, treating members of the trans community as individuals, and as members of society in just the same way as everybody else expects to be treated. Members of the trans community have hopes, aspirations, abilities, and skills. They want to integrate in society in the same way that anybody else does, and not to be isolated or marginalised as a distinct group defined solely by their gender identity. Speaking personally and from my own experiences of trans people, I believe that is it’s what they want to do – they want to get on with their lives just like everybody else.

What advice would offer someone questioning their gender identity or someone who has newly come out as trans?
I can only base my answer on my own experience, though I don’t think this would be so unusual or different to others. I personally found it very difficult to come to terms with the fact that I was a trans person. I was approaching 60 years of age before I did so came to terms with it. When I eventually acknowledged to myself that there was something I had to address, I repositioned realised that I simply couldn’t carry on as I was. , as it This was causing me such distress. In my case, the first thing I did was go and seek some counseling and I found that very helpful in the sense that it helped me get some perspective. The mere fact that I had shared my ‘guilty secret’, - I shouldn’t have felt guilty but that’s how it felt to me, - with somebody else and to allowed was able to discuss it with someone in a rational, objective and impartial way that allowed me to think about what I was going to do. I then went to see my own doctor and found that I was very fortunate, - bearing in mind this was 12 years ago, - in that I had a doctor, who though although she had never dealt with a trans person personally, she was positive, helpful and supportive. The third step, next thing I realised was that I couldn’t live and spend a life in isolation, I needed some help. I did join a trans support group and that engaged me with members of the trans community. At that stage I found that being able to spend time with people, who had similar experiences and feelings about who they were as I did, I felt that tremendously helpful. I think if you try to do it spent transition in isolation, you’re setting yourself up for a fall.