We met with Jake to have a chat about the many groups and projects he has been involved with. 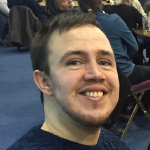 I’m a trans man. I got involved firstly by going along to a MORF meeting, which is a support group for transmasculine people. After the first meeting I got so terrified I didn’t go back for 12 months! Once I worked up the courage to go back, it took me a couple of months to actually speak in the meetings. I then went to a SOFFAS (Significant Others Family Friends and Allies) meetup with my Mum, they were looking for committee members, and of course my Mum put me forward and volunteered me! I am so glad she did though, because I’ve met so many people who are all amazing. It’s built my confidence up so much and the support from the community has been great. I was involved with MORF (a support group for transmasculine people in Manchester) for 3 and half years and became chair for 12 months. I did so much with MORF, we did loads of good stuff; film nights over Pride, a couple of pub quizzes to raise money and many socials. This then made way to start things with BUFF which is the transmasculine event that runs alongside Sparkle, the national trans Pride event that happens here in Manchester. We saw a massive gap in Sparkle because it was only really catering for the transfeminine people, so a group of us got together and started something new. We raised 800 pounds for the MORF binder scheme during the BUFF weekend. I am also involved in other work within the trans community too! I am part of Trans Bare All (TBA), which is a national organization working with individuals to increase self-confidence and self-esteem. I help organise the retreats we do and take care of general admin bits and bobs. We recently celebrated TBA’s 5th Birthday!

How did you find out about LGBT Foundation?
I am part of the Trans Advisory Panel, when I first got involved with the consultations LGF (as it was known then) held with the trans community, I was skeptical about how it was going to go, I think a lot of people were, but I went in with an open mind because they have always approached it by asking the community what they wanted to see happen, they weren’t just pressing ahead and doing their own thing. I was keen for the name to be changed to LGBT Foundation to reflect the organisation being totally inclusive of the trans community. I have really enjoyed being part of the Advisory Group, mainly because I am quite nosey! You get to see the background work being done; it’s also nice to be part of something that’s a clear and positive change for the LGBT community in Manchester as a whole. The meetings are really great and always positive.

Can you tell us your hopes for the new LGBT Foundation trans programme?
I think what is lacking for the trans community in Manchester is what TREC (Trans Resource Empowerment Centre) offered, but that no longer exists. TREC brought the whole spectrum of the trans community together under one roof, that doesn’t really happen anymore. There are still divides within the trans community, and I hope the programme will mean lots of opportunities to come together regardless of backgrounds and experience.

What does trans awareness mean to you?
I think it’s so important so that people know we exist! The stuff we see in the media is so sensationalised, it’s important that people know we are just regular people going about our lives. I am personally quite proud of being trans, I am proud of the work I have done for the community and what the community continues to do. I recently wrote an article for a gay men’s online magazine and I was in two minds if I should do it or not but then I thought to myself “why shouldn’t I?” Being a trans guy, being gay and disabled has been hard, I think the more people who are out there talking about these things, the more it breaks down barriers so it’s not seen as something to be ashamed of.

What advice would you offer someone questioning their gender identity or newly out as trans?
I would confide in someone that you trust, and find the community! I say this to everyone, we are a big community, and there are lots of people out there going through what you are. You might have to travel to find it but it’s worth it! If you have recently come out, or are thinking about it you need to know that there are people ahead of you who want to look after you. That is the best think about the trans community, once you get to know people, they want to look after you and make sure you are safe. Without sounding cheesy, to me it’s like a big family!

Jake has since become a Befriender at LGBT Foundation.