We met with Jenny-Anne to talk about her involvement with trans social and support groups in Manchester and Wales. 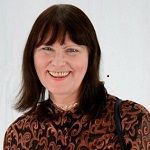 I'm Jenny-Anne Bishop, an older married trans woman (69), living with my trans partner Elen in Rhyl, North Wales. I've been out as a trans* person for over 45 years, but family and work pressure restrained me from full time transitioning until about 9 years ago.

I was born on the outskirts of West London and grew up in Surrey and Kent, knowing from about 4 years old that my sense of who I was did not match my physical body. I first saw a psychiatrist about “gender non-conforming behaviour” at six years old in 1952. All through my childhood and early adult life I dressed in secret as my true self, having learnt it was greatly discouraged by my parents, school and my church. While exploring gender diversity and possible transitioning at University, I was strongly encouraged to get married and have a family as a “cure” to my “deviant” behaviour.

In reality, living with another woman and bringing up a young family just intensified my need to be myself, and after my wife gave me the opportunity to explain my feelings, we agreed that in return for not transitioning to full and permanent living as my true self, not taking cross gender hormones or having surgery, I would go to the support group once a week, have a night out in the clubs as myself once a month and go to a trans weekend 2 or 3 times a year. Although I always wanted more time as myself; I used this as my “coping” strategy for over 35 years (1970-2007).

I felt suicidal many times, but support from my wife; my trans friends and my hope of eventually becoming myself got me through the tough times. I lost my job in Industrial Chemistry sales many times for being trans in my private life, and temporarily separated from my wife and family in 1979 when I was “outed” by the police. In spite of all the strain, my marriage lasted over 30 years and we successfully raised our family

Having retired in 2008, I now concentrate full time on voluntary work for the trans and LGBT+ communities. This includes giving regular Trans Awareness and Equality training courses; being a member of the Westminster Parliamentary Forum on Gender Identity, The Welsh Government Strategic Equality Plan Board, a trustee for several LGBT organisations and a lay Trans Pastoral leader and Committee member of the Manchester Metropolitan Congregation in Chorlton. I am also a member of many organisations and steering groups on reporting and reducing hate crime, trans health care and on Equality and Diversity standards. (NHS / WHSSC, BCUHB, Flint Council, GMP etc.)

I was recently awarded the Homo Heroes Volunteer of the year Award 2014 and invested with an OBE in HM the Queen’s 2015 New Year’s honours list for services to the trans community in Wales.

Can you tell us about the social and support groups that you’ve been a part of?
I was lucky to find my first trans support group in 1971 and became a member of The Beaumont society in 1972. When I moved to Cheshire for work purposes in 1974, I soon found the Manchester TV/TS group or “Wednesday group” (so called to camouflage it’s real purpose) that had just been founded by Stephen Whittle in the Chaplaincy of Manchester University.

I was still associated with this group when it moved to the Gay Village and became Northern Concord (1986), eventually changing to Manchester Concord in 2008. Over the years I got involved in helping run weekends, acting as group photographer, helping others etc. I also become a regular volunteer for the Beaumont Society National Helpline in 1998 and joined the Sibyls group for transgender Christians in the same year, also helping them to organise their retreat weekends.

One of my close friends moved to North Wales in 2000 leading to my association with the Unique Transgender Network which serves North Wales and West Cheshire. I went to support their first meeting in February 2002 and have been a committee member ever since. Attending this first meeting also started my association with North Wales Police where I and other members of Unique have provided regular trans awareness and equality training for the last 14 years. I’m also a member of the North Wales Police Liaison LGBT, Trans and Equality steering groups, the IAG and the CPS Scrutiny Panel.

Working with North Wales Police brought many request for trans awareness and equality training, over the years; together with our sister organisation TransForum Manchester - we have given over 500 courses to more than 100 different organisations and developed almost 40 different courses and workshops for the great diversity of organisations we work with.

The experience of working with Unique and The Sibyls led to the founding of TransForum Manchester in February 2004. This is a discussion group and peer support forum for all transgender people and those in any way questioning their gender. It also acts as a Focus group and assists in Policy documentation. The group meets regularly at the Foundation on the fourth Saturday afternoon.

How did you find out about LGBT Foundation?
I initially found out about the then Lesbian & Gay Foundation (now LGBT Foundation) in the early 2000’s through attending Manchester Pride and other community LGB(T) events. I started going to events at the LGF in 2008, and worked with others to start running the TREC (Trans Resources and Empowerment Centre) Trans Saturdays that were hosted by the Foundation from November 2009 to May 2013.

Can you tell us about your involvement with LGBT Foundation’s Trans Programme?
Back in 2008 I had a conversation with Paul Martin (CEO of the Foundation) about making the LGF more trans inclusive, and this helped inspire the ideas leading to TREC being founded in 2009. When TREC stopped operating in 2013, members of TransForum approached the LGF about becoming more trans Inclusive. The first community discussion meeting was held in March 2014 and led to the founding of Trans Advisory group, which helped the foundation change to the LGBT Foundation in 2015 and set up the Trans Programme. I’ve been a member of this group since its inception in March 2014.

What advice would you offer someone questioning their gender identity or newly out as Trans?
Firstly, not to worry or be ashamed about being trans. It’s a natural diversity, and hiding, supressing or ignoring it causes much more harm. Don’t try to ignore it; eventually it will come out!

Secondly, to search out good internet resources such as GIRES and the LGBT Foundation's Trans Resources. Tranzwiki lists most of the UK’s support groups by region and with detail of the services they provide.

Also make contact with any local support groups, who will be able to signpost resources and provide peer to peer support and networking. They can also direct you to good counselling and sympathetic GP’s and health services if you feel you need such services.

*Trans is an umbrella and inclusive term used to describe people whose gender identity differs in some way from that which they were assigned at birth; including non-binary people, cross dressers and those who partially or incompletely identify with their sex assigned at birth.’