One of our Trans Programme Assistants, Zane Robinson, caught up with the fabulous performer Kate O'Donnell to talk about her latest show - "You've Changed". 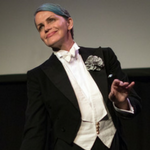 “Hi Kate, it’s really great to chat to you, particularly in the wake of your tour! How is You’ve Changed going?

Really well. We are nearly done for 2017 - since August we have done the show 30 times! Twenty of those in the Edinburgh Festival. It’s a tiring show as I basically transition from Fred Astaire to Gingers Rogers, recreating dance routines from the 1930s.

In terms of gender, you’ve likened today to the 1930s – could you explain a bit more what you mean by this?

I transitioned in 2003, which may seem quite recent, but in trans terms, that’s a long time ago. So in this show I put myself in the 1930s, as basically 14 years ago, no one had a clue. It was all about living in stealth back then and “passing”, like being in a silent movie with no voice.

You make a point in your tour that it’s been 14 years since you transitioned. What kind of changes have you seen in society in regards to gender in those 14 years?

Well we have Trans Pride now - you were lucky to find trans people 14 years ago! They were hidden and didn’t want to be seen out together, as we were vulnerable. This really is our golden era; it’s unrecognisable. We are much more of a community now: more visible, more vocal, more political. The T in LGBT only got added to organisations like Stonewall and yourself in the last few years. We were in the Dark Ages 14 years ago - the ‘Trans Dark Ages’ as I call them.

What has been your experience of media and arts engagement as a trans woman?

Ok now this is interesting. There can be a narrative about the trans story that the media want to portray and often it’s not very positive. Sad, lonely, lost, vulnerable trans people. Cut to me - out and positive with a new trans theatre company, Trans Creative. Some press, TV, and radio don’t know what to do with that. It doesn’t fit their story. The media often struggle to see us as vibrant, happy in relationships, and getting on with our lives. In terms of the arts, I am calling the shots. It’s my voice, my story, no one is representing me - I am. That feels positive to not be edited or slotted into that stereotype.

What advice would you give for a trans person who is looking to engage in arts, acting, and performance?

This is the time to do it. When I tried to make work ten years ago, I was told it was too niche. Today I get a call every week about a TV, radio, or theatre project. So be yourself. Work hard, be nice (it’s a tiny industry, word gets round if you’re not!), get as much experience as you can - free and paid - and keep going. I came back to performing when I turned 50, so if I can do it, anyone can.

Where do you envision society’s attitudes towards trans people in the next ten years?

I think it’s our attitude that we should be working on in the next 10 years. We spend too much time worrying about society’s attitudes. We need to live authentic, unapologetic, full lives and if society sees that, their attitude will change. I always say, if you’re waiting for someone to approve you being trans, you will be waiting a long time. I think politically and legally, things need to be in a better place so we have the same rights as any other human on the planet. With the review of the 2004 Gender Recognition Act coming up, hopefully things will feel more like 2017 and not like 1930!

Thanks Kate – good luck with the rest of your tour from everyone at LGBT Foundation!”