Pauline is one of our volunteers who regularly attends #TransMCR and uses her experiences to help other trans people reach their full potential. 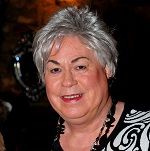 Can you introduce yourself and share a bit about yourself?

A warm and friendly mature transwoman, of 68, who still feels like a young woman inside. These days I live most of my time as Pauline, but sometimes I choose to be a man - my own halfway house suits me and it fits in with the parts of my life that have nothing to do with the trans community. My birth sign is Pisces...two fishes swimming in different direction is rather apt.

Having worked and lived for over 30 years in Belgium, Germany and the Netherlands, I have been very fortunate to experience other cultures and languages. In the late 90s I came out as Pauline in the Netherlands in Dutch, and became an active member of the trans community there. Now it’s called transgender vereniging (or transgender association), back in the 90s and noughties when I was living in Holland it was called LKGt&T, a Dutch national group of transgender people which met and still meets in different cities. I used to go to meetings in Amsterdam, Utrecht and Rotterdam and sometimes Eindhoven; in 1998 a group of us “Dutchies” came to England for a Trans Essex weekend which was like being giants in Lilliput. Some of my fellow Dutch trans women were 6’5” (I am a mere 5’10”)!

Since my return to the UK I have worked on a transgender website (Transtastic) as a site administrator and moderator for over 6 years, trying to help other trans people on their journey with articles, blogs and advice. In March 2016 I joined the LGBT Foundation as a volunteer. My life experiences and ups and downs are, in my view, very common for many transgender people and they have helped me to be empathetic and to help other trans people on their journey. As with selling it’s all about listening to others and not making snap judgements.

You have quite an impressive history in terms of the professional work you have done; are there any lessons you have learnt from this that you want to share?

Probably the main lesson for me is that in the industrial and technological world of chemicals and plastics in 2016 there is still not a positive attitude towards trans people. It’s like being gay in any time period between 1950 and 2010. These attitudes take time to change. And change is slow.

I was very fortunate to work in international marketing and sales of technical plastics for 45 years. However it is a technical and male dominated industry, and whilst it was never transphobic it was not and still is not positive in its attitudes to the LGBT community. Some companies in engineering and chemicals do practise equal opportunities for trans people, but they are the exception rather than the rule.

In November we mark Trans Day of Remembrance; could you tell us what this occasion means to you?

It means a lot to me personally, not as part of any group. It could have been me who was killed for being trans; luckily I have lived in relatively tolerant societies and communities and I have only ever had to face verbal abuse or name calling, the kind of things that women accept as an everyday occurrence from men. And it’s almost always men who are intolerant and aggressive towards our community. I have been attending TDOR for 6 years now; in the early days we used the LGBT stainless steel memorial to gather around as the centre point of the memorial. After 2013, when the trans community had its own statue in Sackville Gardens, the event has become more special and the attendances have grown.

TDOR gives me the time to reflect on those who have died because of bigotry and hatred towards my community; sadly most of those who have been murdered were living in countries where attitudes are much less tolerant than here in the UK.

How did you become involved with the LGBT Foundation?

It all happened earlier this year, because I wanted to do more to help the trans community, and a friend of mine was a befriender. I approached the LGBT Foundation directly in March 2016 about volunteering and then was interviewed and had training as a volunteer. Since the #TransMCR programme started in April I have volunteered at most of the monthly events, and hope to be able to become a befriender in the near future. My personal goal is to help others in the transgender community with advice and help.

What advice would you offer someone questioning their gender identity or newly out as trans?

Read as much as you can about being transgender and gender dysphoria on the internet. These days it is so much easier than it was pre-internet and many of the negative attitudes in society at large have changed. There is a lot of help online and lots of details about trans support groups.

And most importantly join local trans groups and go to local trans events - scour the internet for details of these. These are the opportunities to meet people like you. The LGBT Foundation is a great example of one of these places!