We caught up with one of the new Trans Programme Assistants, Zane Robinson, to hear about his story! 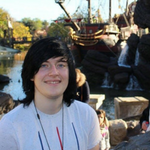 I’m Zane, I use he/him pronouns and I am agender. I am one the Trans Programme Coordinator at LGBT Foundation. I realised I was trans when I was 15, a few months after hearing the term ‘transgender’ for the first time. I’m from Cheshire, and at the time, LGB felt like it was non-existent there, never mind trans presence! I didn’t come out until I was 17, and then I came out as a trans man. It took another few years before I decided that “agender” was more fitting to my experience of gender, or lack thereof.

I moved to Manchester to study Psychology at the University of Manchester and I was overwhelmed with the LGBTQ+ presence in the city. I decided that aiding in the promotion of LGBT awareness and equality was what I wanted to do, so I started volunteering in anything I could. I was one of the admins of the University’s LGBTQ+ Society and I currently work with LGBT Foundation’s Trans Programme as the Trans Programme Coordinator.

How did you find out about LGBT Foundation?

I was really keen to meet other trans people when I first moved to Manchester, and I heard about MORF from another person at University. I ended up attending one of their sessions, and I got to see LGBT Foundation for the first time. I became very familiar with the services and events that LGBT Foundation ran whilst doing LGBTQ+ student and youth work in Manchester, and the Trans Programme particularly took my interest. I was very eager to get involved!

Can you tell us your hopes for the LGBT Foundation Trans Programme?

I want to see a wide variety of trans people engaging with each other. Our community is so diverse, and we share so many similar and different experiences. It’s incredible how far we’ve come in even the last few years, and I think the trans community can do amazing things. The community has been the driving force behind incredible movements, and I believe it will continue to be. I hope that the Trans Programme can help bring together the community and help those in isolation feel like they matter.

What does trans awareness mean to you?

Trans awareness is so important. Even something as simple as using the toilet or being referred to by name can be a massive challenge for trans people, and it’s something that most people don’t even think about. Being aware of the barriers that trans people face is essential for helping us to navigate society. It also means not being afraid of the idea of someone you know being trans – we’re not scary! It’s being supportive of people you know to be trans, rather than challenging their identity.

What advice would you offer someone questioning their gender identity or newly out as trans?

There are far more trans people than you will first think! That’s what I’ve definitely learnt. Don’t feel like you have to force yourself into one narrative of ‘transness’ that you might see in the media. It’s your identity and your journey, and if a term doesn’t seem to fit you, that’s okay. You don’t ‘have to’ be anything – find what’s right for you.