LGBT Foundation has developed the LGBT Action Plan with colleagues from across all sectors and Greater Manchester boroughs, through funding from Manchester City Council’s Equalities Fund. As a group we have worked collaboratively to understand the key issues in Greater Manchester and identify subsequent actions that will benefit LGBT lives, fitting under the four areas of leadership, monitor, services and visibility.

Greater Manchester is home to an estimated 215,000 LGBT people. A population larger in size than that of the whole of Rochdale, LGBT people face a significant number of inequalities compared to their heterosexual neighbours; from poorer physical and mental health, increased risk of hate crime and discrimination, to loneliness and isolation and negative experiences in employment. It is with these issues in mind that LGBT Foundation has developed the LGBT Action Plan.

We encourage you to read and share the actions with your colleagues and peers. We believe that if we all take on these actions we can generate change in organisations, communities and society at large, and create a more inclusive environment for all of Greater Manchester’s LGBT citizens.

If you’d like to get in touch with us what you can do against the actions, or would like to contribute a case study, please contact [email protected] 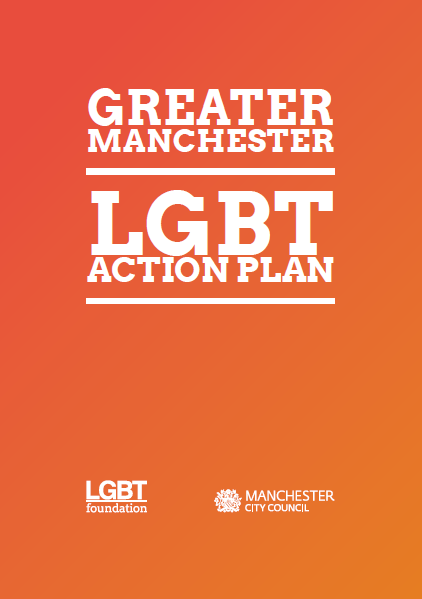 We’ve been collecting case studies from organisations who are achieving, or working towards, the actions highlighted in the Action Plan.

Contact is a national contemporary arts organisations, providing a safe space for people to explore the issues of diversity, inclusivity and representation, and engages in Greater Manchester’s celebration of diversity through its many strands of activity. Contact is committed to be representative of the communities it serves in its staff, volunteers, artists, trustees, audiences and participants. After a period of consultation with staff and young people, Contact has introduced sexual orientation and trans status monitoring as part of its standard demographic monitoring. Contact’s Equality, Diversity and Inclusion Action Plan is reviewed on a yearly basis to ensure that best practise is maintained, and this will review the Using their own development as best practice, Contact is also engaged with national audience development agencies to affect positive change in questions around sexual orientation and trans status monitoring.

The Manchester Metropolitan University (MMU) Board of Governors has appointed Barry Harwood as the Board level Equality & Diversity Champion. Barry’s role is to champion all areas of equality and diversity at the Board level, Barry actively promote lesbian, gay, bisexual and trans equality within his role. Within the scope of the Equality & Diversity champion role, Barry helped to launch MMU’s targeted LGBT Role Model & Allies program, including completing and promoting his own role model profile which was shared across the organisation.